I started welding in 1978, 2 years after I got out of the Marine Corps. I never welded a day in my life, nor did I really set out to become a welder.  I actually refueled F14 Fighter Jets in the Marine Air Wing, and thought I would stay with aircraft in some way.   When I got out as a young man and new father, the airline industry had just gone through a major downturn so I took whatever work I could get to provide for my family… A good friend of mine worked for an ornamental iron manufacturing company and said he could get me a job there if I wanted to learn how to weld. Little did I know what all that would involve! Since then I have done many different types of welding and fabricating, from ornamental iron to structural steel with the Iron Workers Union to boiler work and the design, weld, and installation of Tuna Towers on sports fishing boats in Rhode Island. I have had to learn metallurgy to a certain degree to understand what takes place when you introduce electrical current/heat into the material being welded. Welding has its own language and symbolism, which tells the welder what, where, and how to weld a particular weld joint. I’ve also had to learn the use of many metal working tools and machinery along with the reading and understanding of blueprints or mechanical drawings.   In the past 10 years or so, I’ve noticed a decline in experienced / certified welders. With the age of technology, cell phones, internet, GPS etc. the crafts have begun to suffer. We have automation and robotic welding which has certainly helped to improve productivity, but the real die hard welders are now nearing or have already reached the age of retirement. This leaves the next generation!

What I’ve really appreciated about the various Coghlin Companies (Columbia Tech, DCI, Cogmedix and Coghlin Precision) is their commitment to re-invigorate the manufacturing trade in Massachusetts. This has led to re-inventing themselves as a company more than once over the last century, to keep up with the demand for a quality product delivered on time at a competitive rate to the customer. At a time when many companies are downsizing, they have continued in their mission. They have seen and valued the benefit of having a certified welding department as a part of their turnkey operation and have continued to invest in that venture.  Columbia Tech, DCI and Coghlin Precision have all registered with the DDTC to handle ITAR controlled technology.  Each of the companies is also dedicated to insuring the safety of intellectual property and design of our Armed Forces. Welding has been a part of that mission as we manufacture components that are ultimately used for the Department of Defense.  There is great satisfaction in knowing that we are helping to keep our war fighters equipped with the latest technology to insure their safety and success in the fight against terrorism and in protecting our freedom so that we can continue to work, play, and worship in the freedoms we now have.  The American Welding Society (AWS) has recognized the need for sparking (pun intended) a new interest in welding and has invested along with other companies such as Lincoln Electric to improve our trade schools welding departments with the intent of bringing new blood to the art and craft of welding. I’ve included a video with Jay Leno promoting welding to the next generation.

With that, I will simply say, “welding has been burry burry good to me.”

Craig Thompson is a welder at Coghlin Precision, a Coghlin Company. 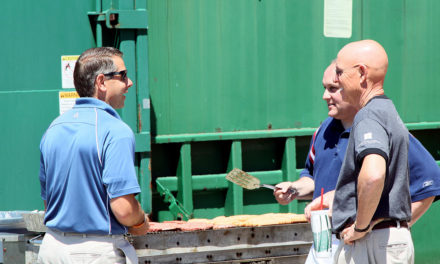