Launching to a Robotics Future Keith Ruenheck is a Principal Software Engineer at Columbia Tech. He graduated with an electrical engineering degree from Umass Lowell and is currently working toward completing his master’s degree in robotics engineering at Worcester Polytechnic Institute (WPI). Recently, Keith attended a research symposium, hosted by WPI, called: ‘Launching to a Robotics Future’ to celebrate the 10-year anniversary of their Robotics Engineering (RBE) program. The all-day event featured keynote speeches, poster presentations, and panel discussions. Keith describes the highlights from the event below.

In her welcoming remarks, WPI president, Laurie Leshin shared her excitement about the program, stating that RBE is “an incredible model for higher education”, and that “there’s no program at WPI that’s grown larger or faster in the last decade.” 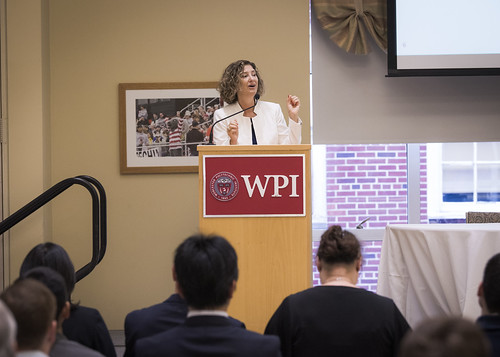 Dr. Leshin was followed by keynote speaker Dr. Robert Howe, Director of the Harvard Biorobotics Laboratory, who spoke about “Robot Hands for the Real World.” Dr. Howe pointed out that the first robot hands were anthropomorphic (human like), which were visually pleasing but were too sophisticated and expensive to be feasible. In contrast, the hands he creates are more practical. One such hand has only three fingers, with a suction cup protruding from the ‘palm’, to help grasp objects.

The next keynote speaker was Dr. Wolfram Burgard, VP of Automated Driving Technology at Toyota Research Institute (TRI). Despite the cerebral sounding title: “Probabilistic and Machine Learning Approaches for Autonomous Robots and Automated Driving”, his talk was quite interesting and easily understood. Dr. Burgard said that Toyota is focusing on two distinct capabilities of autonomy: Guardian and Chauffeur.

Guardian includes technology to prevent accidents when a human is driving. Existing examples include Lane Departure Alert (LDA) and Automatic Emergency Braking (AEB). Chauffeur means the vehicle is primarily responsible for driving, leaving the human with varying degrees of involvement, such as monitoring the environment, acting as a fallback, or none at all.

The third keynote was given by Dr. Shiekegi Sugano, Dean of the School of Creative Science and Engineering at Waseda University, Tokyo. His talk covered robotics from 900 BC to the present. One of his older examples was a robot from Greek Mythology named Talos, a giant bronze man who protected Crete from invaders by circling the island three times per day.

For more recent examples, Dr. Sugano referenced the work of his colleagues at Waseda University including WABOT-2 (1984), a humanoid robot that played the organ, WENDY (1999), who could crack and cook an egg, and her successor, TWENDY-ONE (2007), who can peel an apple. 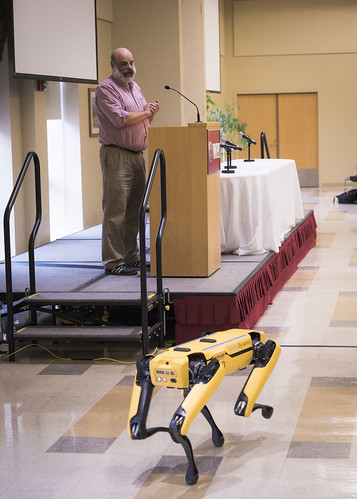 The final keynote was given by Dr. Al Rizzi, Chief Scientist at Boston Dynamics (BD), who shared the company’s goal: “to develop and productize novel locomotion systems that can go anywhere people and animals go.” Dr. Rizzi showed videos of their robots, which included Big Dog (quadruped), Atlas (humanoid), and Spot, their most recent quadruped. The company plans to build 1,000 units of Spot in the coming year, and foresees applications in construction, hazmat teams, and bomb squads. BD makes great videos of their robots, including Atlas doing a back flip, and Spot performing with Cirque du Soleil.

To close out the morning, WPI Provost, Winston Soboyejo talked about WPI’s new $120 million Smart World building (expected to open in January 2022), which will prepare the school for the ”Fourth Industrial Revolution”. He also announced a recent $25 million award for an initiative that will connect robotics, biology, and advanced manufacturing.

In the discussions, Chris Jones from iRobot predicted that the aging human population will bring about a need for robots in assisted living. Tom Ryden from MassRobotics addressed the problem of robots replacing humans in the work force, stating that innovation throughout history has always caused the nature of work to change, but not the employment rate. Tom also mused about Bill Gates suggesting that this problem could be mitigated by taxing robots; but Gates must have forgotten about the number of bookkeepers replaced by the spreadsheet. 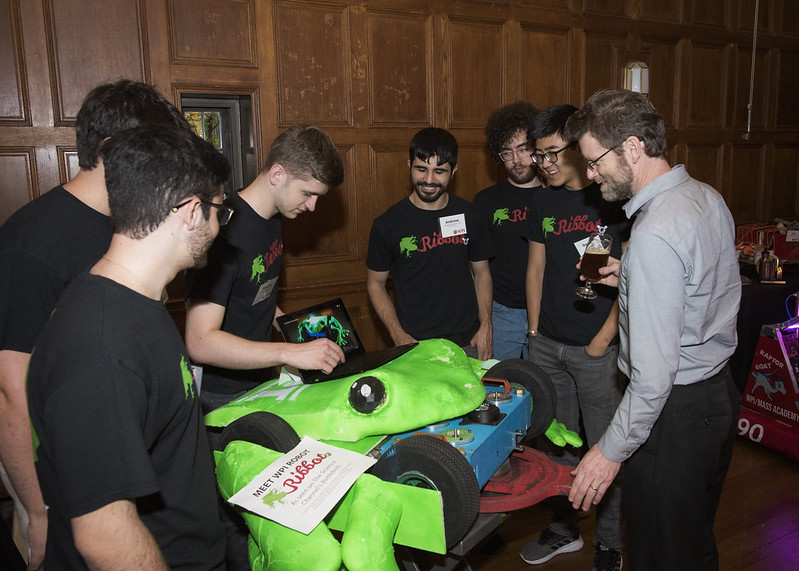 An attendee observes a demonstration by 2019 Battlebots contestant Ribbot and its creators; image courtesy of WPI Alumni

The event concluded with a reception, where hands-on demonstrations included a robotic band created by Dr. Scott Barton (professor of music and RBE), an underwater robot for harvesting lion fish (an invasive species), and Ribbot, a 2019 BattleBots contestant. 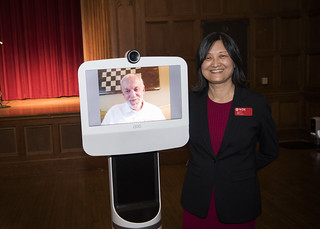 A shout out was also given to Ken Stafford (Mechanical Engineering), whom Dr. Genert named as a founding uncle of the program. Dr. Stafford was vacationing in Maine, but joined the festivities via telepresence (provided by Ava Robotics). A fitting tribute to robotics and the technology of the day, but we have to wonder if attendance at future symposiums will be 100% telepresence.

Columbia Tech proudly provides world class Time to Market Services™ to a wide variety of innovators in the robotics and automation industries, from product development to full scale manufacturing and global fulfillment services. Our team of Caring Associates is passionate about working collaboratively with our customers to help build the future of such an exciting and rapidly growing industry, and we know it is only the beginning!

Create the Future of Robotics with Columbia Tech